Images of the sculptures bequested by Frank McEwen, OBE, to the British Museum are now online.

The collection includes early works by some of the most significant artists in the Shona sculpture art movement, and we’re sure our collectors will find them fascinating.

Frank McEwen, OBE was the influential first curator of the National Gallery in Salisbury, Rhodesia (1957-1973). He encouraged local artists and brought their work to a worldwide audience, with ground-breaking exhibitions at Musée Rodin and the ICA amongst others. He retired in 1973, due to ill-health caused by continued resistance to his work from his white peers. 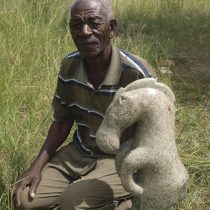 Ephraim is particularly well-known for his endearing sculptures of horses. He is featured in (and is pictured on the cover of) ‘Myth and Magic: The Art Of The Shona Of Zimbabwe’ by Joy Kuhn.